Survival Holidays: The Problem with That Phrase

Survival holidays are something everyone should try at least once; we’ve made that much clear in previous articles. In favour of full disclosure, however, we feel we should let you in on a little secret: there’s no such thing.

To be clear, we’re not saying that all companies claiming to offer survival holidays should be brought to account, only that the phrase itself is problematic. 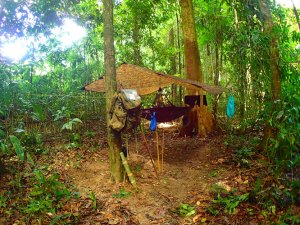 “Survival holidays”, as a phrase, is an oxymoron. That is to say it makes no sense. It contradicts itself. However you define “holidays”, it is hard to escape the notion that they are usually relaxing or leisurely affairs. Googling the word will tell you that a holiday is “an extended period of leisure and recreation, especially one spent away from home or in travelling”, while the online version of Collins dictionary explains that “a holiday is a period of time during which you relax and enjoy yourself away from home”. Both refer clearly to relaxation and leisure.

Clearly, survival and holidays evoke very different feelings if we’re going by the words’ definitions. The idea that you could relax in leisure and recreation while struggling to exist is a problematic one.

A survival trip is not a holiday … or, at least, the words are not interchangeable. Some seasoned travellers may choose to take time off work for an Amazonian escapade, but even they would probably agree that most people’s idea of a holiday is quite different.

If a holiday sits at one end of a relaxation scale, survival sits at the other. That means we’re looking at a very broad spectrum when it comes to survival holidays – all manner of things could happen.

Why does it matter?

You could certainly argue that it doesn’t matter at all. All of this is rather pedantic. Everyone knows what you mean when you say “survival holiday”, and no one will misunderstand you. It is, however, worth pointing out some of the issues with this phrase for the simple fact that it could downplay the circumstances of survival.

A lot of this comes down to weighting; certain courses are hardcore, erring far more on the survival side of things. With Bushmasters, for example, you will be competing with the elements and not doing a lot of relaxing. Other courses will allow you to sample the world of survival before you return to a safe retreat – one isn’t better than the other, but it’s important to know which of these you are looking at.

Always speak to your travel guide before booking, as survival holidays can come in a variety of shapes and sizes. Anyone hoping to test themselves physically should ensure they’re signing up to something that will allow them to do that, while someone looking for a taster session in survival should check that their course won’t throw them into the wilderness with minimal preparation.