The Bushmasters team consists of staff from the UK and guides from Amerindian communities in the Guyanese jungle, as well as trusty ole sea dogs in Belize and amazing Bedu tribesman in Jordan. Some of the more prominent figures are outlined below: 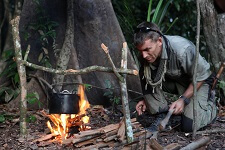 Ian Craddock was a British Army officer who served in the Infantry and Special Forces for 10 years. He first moved to Guyana in 2002 organising jungle expeditions for a British conservation charity. Prior to that he has lived in London, Cyrpus, The Falklands, Jordan and Belize.Ian has completed a variety of specialist courses from Combat Survival Instructor to Military Mountaineering and Climbing instructor. He has taken part in exercises and operations in a host of countries around the world from the Gulf to the Falkland Islands, from North America to the Indian Himalayas – where he jointly led a joint Anglo-Indian team on the first successful ascent of Mt Tingchen Khan. He did spend a couple of years trying to do the city life in London, but got dragged back to the outdoors quite easily! Each year Ian spends about 75% of his time in the jungle, on desert islands or in the Arabian Desert. The rest of the time he’s planning how to get back there! 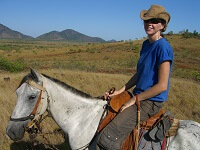 Sarah Jones has lived in Guyana since 2003.  She spent  two years working for an expedition company, providing back-up support, planning extended expedition programmes and working on the PR for the company in Guyana before in 2005 she set up Bushmasters with Ian. 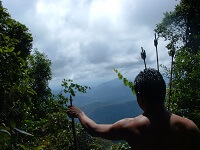 Our Guides come from the biologically diverse and unique Rupununi, the majority being from the Makushi people. Individuals may differ from trip to trip for, as well as working for Bushmasters, they also have farms, families, and houses to look after. All of them are amazing in the jungle and savannah. They have an uncanny ability to know exactly where they are, how to get somewhere and find their way back again, even in completely unexplored territory (which is not uncommon with Bushmasters). Finding food from the forest, medicines, water, catching fish, all this is second nature to them… just like going to the pub for us!

Lionel James is from Surama and one of our more experienced guides in the jungle. Amongst a host of other huge trips he’s also undertaken expeditions from Guyana crossing over into Brazil and Venezuela. Get a map and see for yourself how far that is, especially on foot through dense jungle! He is a great character and has lots of stories, which he’s happy to tell you! 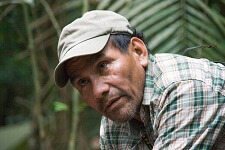 Harold Captain is an absolute star. There is nothing Harold does not know. He is the senior jungle man in his area and commands the respect of everyone. All ask for Harold’s advice if they have any sense. He’s known as ‘The Jaguar’ within the village because of the time he’s spent in the jungle (over half a century now). Not that these few years have slowed him any! He’s tougher, stronger, fitter and better than anyone at pretty much everything, from living in the jungle to drinking ale! 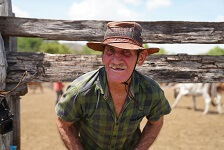 A real wild west cowboy figure – he likes a hard days work, followed by a hard nights drinking and tall stories. A jack of all trades, Tommy willingly turns his hand to round-up, branding, slaughtering, castrating the bulls, taming the wild horses or even fixing his series 2 landrover. Anything that needs to be done on the ranch, Tommy can do, and has been doing so for many decades. He is a well respected and colourful character in the Rupununi. Someone you won’t forget on your Vaquero or Trailride trip! 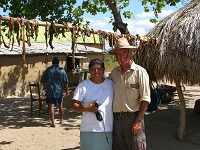 Charlo Melville is a legend within the Rupununi. His family arrived from Europe generations ago and built the largest cattle ranch on earth, Dadanawa. Charlo now owns a number of smaller ranches and keeps the spirit of the Rupununi ranch alive today at Konaiki-kizai; his 60 square mile ranch in the south savannahs of Guyana. Charlo is an amazing artist and handcrafts beautiful products from leather, including the machete sheaths used on our survival courses and the saddles used on our horseback trips. He does the whole thing, from culling the cow to curing the leather to engraving the artwork into the finished article