Four of the Best Films Set in the Jungle

Over the course of your life, it’s extremely likely that you’ll have watched a number of films set in the jungle. As the jungle is such a fascinating environment, it’s the perfect location for creating footage of the highest quality. Here at Bushmasters, we’ve been lucky enough to work on a range of TV productions for a number of different channels and producers, so we know what it takes to transport viewers from their seats to the dense, luscious environment that is the jungle.

That’s something a number of film producers have also succeeded in doing. Below, we’ve listed four of the most universally popular films set in the jungle, and taken a look at how the jungle has been used each and every time.

Based on a 1918 novel written by Edgar Rice Burroughs, Tarzan is probably the most well-known from our list of four. The film follows an orphaned child, raised by gorillas in the heart of the jungle. It remains the inspiration for many a modern film, and is a story that everyone will be familiar with, in whatever form it was first presented to them.

The jungle is portrayed in both a comforting and an intimidating way throughout the film. For Jane, Tarzan’s love interest, it starts out as a terrifying and hopeless environment, while Tarzan remains firmly at home throughout. The stark contrast between the western world and the heart of the jungle is key to Tarzan, or any of its variations, and it is this juxtaposition that facilitates the action, comedy, and eventual resolution of the film.

We’ve deliberately not specified which of the Kong films we’re talking about here. There is an abundance of films starring the world’s largest primate, all from different eras. Despite their differences, though, they all share a common denominator: the jungle.

Regardless of how Kong has been depicted over the years, he’s always made the jungle his home. The thick vines and giant trees of his home have allowed him to thrive, growing stronger and larger than … well, pretty much everything!

The adventures of Mowgli, Bagheera, and Baloo were first brought to us in 1967 in cartoon form, and have been recently remade into a live-action version. The title makes the link here rather obvious, but it’s exceptionally well-known and popular when it comes to children’s films set in the jungle.

The Jungle Book’s plot is centred around the protagonist, Mowgli, attempting to navigate through the jungle, encountering snakes (Kaa), orangutans (King Louis), and tigers (Shere Khan) along the way. As a setting, the jungle is used to add a sense of mystery and intrigue to Mowgli’s adventures, with a new encounter lying round almost every corner.

Again, the mystery and intrigue of the jungle is what makes it perfect as a setting. As Arnold Schwarzenegger and his special forces team are stalked by an invisible creature, the jungle adds an extra layer of suspense.

Where The Jungle Book offers light entertainment, Predator is slightly less family friendly. Today’s special effects make some of the original film’s sequences look a little dated, but this fast-paced blockbuster does more than enough to make up for that with its intense, action-packed nature. 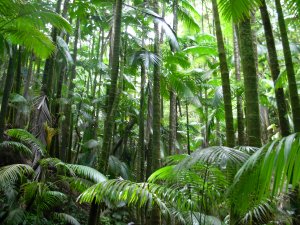 Here at Bushmasters, we’re rather familiar with the jungle. We spend a lot of time there during our jungle survival courses, and there isn’t much that you’d expect to see in such an environment that we haven’t seen ourselves. Granted, we’ve never found any giant apes or talking tigers, but it’s an incredible experience nonetheless.

If you’ve enjoyed our post, and want to see the inspiration for The Jungle Book or King Kong up close, then why not join us on our next jungle survival course? You can check out the dates on our dates and costs page, or contact us via our online form. Regardless of your experience, it would be great to hear from you!